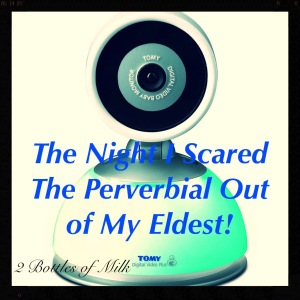 It’s a familiar scene for us all as parents I’m going to paint here for you, it’s the night where no matter what you do your child will just not sleep or stay in their bed. But how did that end up with you scaring your eldest I hear you ask? I will explain….

…it was a night not that long ago when we had such an evening. Oliver was literally up, down, up, down for around four hours and by the time it got to around midnight, and I had to be up at six the next morning, I decided it was time to take ‘decisive action’ to make sure he stayed in bed, this is where I can say this so called ‘decisive action’ backfired dramatically.

Ever since Oliver was born we have had the same video monitor, it’s not an all singing all dancing one but it does have some functions that we’ve either never used or used very rarely. One of these functions is a speaker that you can use to soothe the baby, which we’ve never used as wel found it easier to just get up and deal with the baby. This particular evening for some unknown reason I decided to use this feature. Oliver was getting up again and I could see him climbing out of his bed and so I pressed the button for the speaker and said in my Dad voice “Get back into bed now”. Well this was a huge mistake as having never used the speaker before Oliver wasn’t aware of it or used to it and being that he was in the dark he freaked big time.

First he screamed then started running for his bedroom door which was closed and ran straight into it, knocking himself onto the floor, by this point I was the other side trying to open it while he was still screaming. When I got into the room I picked him up and carried him into my wife and I’s bedroom where he proceeded to tell my wife that there was someone in his bedroom.

We now had the huge task of calming him down and explaining what had actually happened, not an easy task when dealing with a terrified three year old. My wife tried a couple of times to get him back in his own bed after this but he wasn’t having any of it and ended up spending the night in our bed.

I learnt my lesson that night and will never ever use that function again.

What funny adventures have you had happen as a result of misadventure? We would love to hear about them.

4 thoughts on “The Night I Scared the Perverbial Out of my Eldest! ”